The earliest mention of bells is in the Commissioners’ report of 1552 when there were three bells in the “steeple”. The bells were given into the safekeeping of four parishioners “to be at all times forth coming to be answered”. 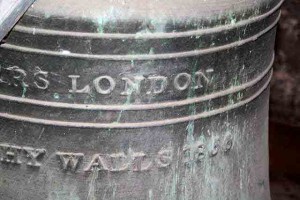 The tower now houses a peal of 3 bells cast by C & G Mears at the Whitechapel bell foundry in 1856 but it is not clear whether these are new or whether they are the original bells recast. 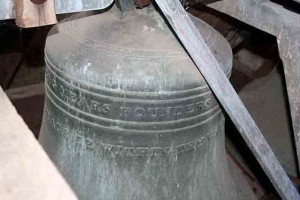 An inscription reads “Peace be within thy walls”.

The bells were presumably hung by C Bullock & Son as recorded on a plaque attached to the bell frame.
Details of the bells are shown below: 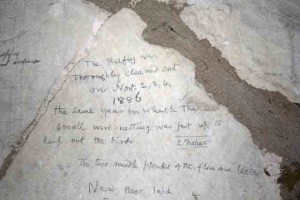 Among many graffiti recording episodes of work on the tower is an early one from 1886
showing that birds were a problem even then! 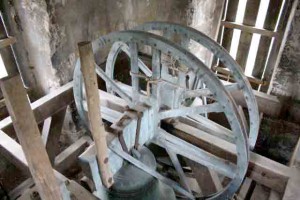 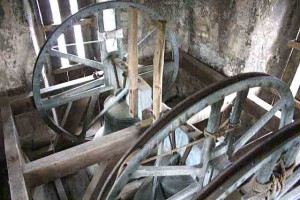 In 2015, three additional bells were cast at the Whitechapel Bell Foundry and the original bells re-tuned.  All six bells have been re-hung.  The details of the six bells are now as follows:

A new chiming mechanism has been installed so that all the bells can now be rung by one person.  Anyone interested in ringing the bells, especially at weddings for which a modest fee is payable, is asked to contact one of the churchwardens.