This magnificent monument is almost certainly by Maximilian Colt, sculptor of the tomb of Elizabeth I in Westminster Abbey. 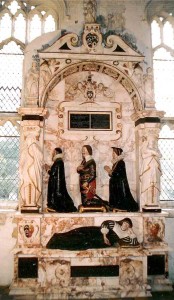 The first John Fryer, father of Thomas Fryer, the elder of the men commemorated on the monument, was born at Balsham and educated at Eton, King’s College Cambridge, and the University of Padua, then the greatest medical school in Europe. Although he was for a time a Lutheran, and was indeed imprisoned for heresy in the 1520s, by 1561 he was imprisoned in the Tower of London for Catholicism. He was released in 1563, but died of the plague in October of that year.

His son, Dr Thomas Fryer, educated at Trinity College, Cambridge, and Padua, acquired the manor of Harlton from another recusant, Robert Barnes, with whom he had been implicated in the case of the Catholic Franciscan martyr John Jones in 1598. Barnes had been systematically persecuted over several years by the Catholic-hunter Topcliffe on suspicion of harbouring priests — probably because Topcliffe was after Barnes’s estate, which would have been forfeit if Barnes had been condemned. Thomas Fryer, although frequently appearing on the recusant rolls, does not seem to have been subject to the same persecution as Barnes; the references to him as ‘Dr Fryer’ suggest that he was sufficiently famous as a physician to have enjoyed the protection of powerful friends. Dr Thomas Fryer is celebrated on the memorial as a second Aesculapius, but the monument reflects the fact that Fryer family life was not happy. Thomas Fryer’s will, dated 9 November 1617, explicitly disinherits his eldest son, John, who had followed in both the family profession and the family religion, in favour of a younger son, Henry, a lawyer:

‘I do give and bequeath to my eldest son John Frier, Doctor in Physick, the somme of fifty poundes of lawefull money of Englande although I must in confidence … confirme and protest and denounce openly and dolorous to all the worlde manifest thorough his many great impieties to his parents and especially towarde his tender carefull and mercifull mother, and other horrible immoralities and enormities, towarde his second brother Henry and other detestable misdemaynor towarde his sister Susan too horrible and shamefull to repeat, he hath not deserved to have one penny nor to be accounted my son, considering the care I took to bring him up to learning with no smale charge …’

The denunciation occupies almost half of Thomas Fryer’s two-page will. John’s offence is made more specific in a letter from a secretary of the then Archbishop of Canterbury, George Abbot:

J[ohn] Sanford to William Trumbull 1614, July 28. ‘I can write you no news from Croydon, save only that Dr. Friar since the death of his wife goeth about to disinherit the young doctor his son, at the instigation of a younger son, and a daughter, who both charge him with his Paduan Italian lechery towards themselves. My l[or]d [the Archbishop] had the hearing of the matter. …

Unfortunately the Abbot papers at Lambeth Palace are incomplete and at this moment no further information is available on the outcome of the case. Any offence probably took place when the Fryers were children. Henry, the younger of the men commemorated, died after a fall from his horse in London; after the death of his widow Bridget, John Fryer (who outlived everyone, dying at the age of 96 in 1672), finally gained possession of the inheritance from which he had been excluded by his father and brother. After John Fryer’s death the Court of Chancery decreed in 1676 that the whole of the estates should be vested in the governors of Christ’s Hospital, subject to the payment of specific sums mentioned in Henry Fryer’s will. Fryer’s Charity still exists, its funds now being devoted to educational purposes.

The monument shows the figures of Thomas Fryer, his wife Mary and their son Henry kneeling in prayer facing east. Thomas is dressed in Doctor’s robes and wears a skull-cap, another mark of a scholar. Henry is wearing armour, the conventional marker for a gentleman. Mary, who died in 1613, wears rather old-fashioned clothes, suitable for an elderly woman, including a farthingale, modest cartwheel ruff, and on her head a type of flat headdress known as a bongrace. Below them reclines Henry’s widow, Bridget, dressed in the latest fashionable mourning, with a high-waisted dress, which is allowed to fall naturally without stiffening, full sleeves with lavish cuffs and a wide collar. Bridget in fact wears the dress of the reign of Charles I, Mary the dress of a prosperous woman of the professional classes of the reign of Elizabeth I.

The monument is surmounted by the figures of the virtues Religion [viewer’s left], with hands clasped looking upwards — a drawing by the eighteenth-century antiquary William Cole shows that she formerly held a cross; Faith, holding a cup, and Charity [top] holding the hand of one child while breast-feeding another. The winged figures in the spandrels hold palm-fronds symbolic of martyrdom and hold out wreaths, symbols of victory and fame: these probably allude to the Fryer family’s sufferings for their Roman Catholicism, as well as Thomas Fryer’s fame as a physician and victory over death. The inscriptions are enclosed in cartouches of unusual design, and there are several grotesque faces in the decoration of the monument — such faces are not rare on contemporary memorials, but are rarely found in such profusion.

[Greetings to those who look upon these stones. This monument is raised to Thomas Fryer, Doctor of Medicine, the second Aesculapius, most well-de serving father of Henry Fryer Esquire, and also to Mary, the most devoted wife of Thomas and mother of Henry. The first of these (Thomas) died on 9 May 1623 aged 86. She however on 11 May 1614 aged 57, both yielding up to heaven what was of heaven, returning to earth what was of earth.]

THIS MONUMENT OF MEMORY IS RAYSED BY Ye EXECUTORS
OF HENRY FRYER ESQUIRE, SECOND SONNE OF THE
SAYD THOMAS FRYER DOCTOR IN PHYSIQUE
WHO DYED Ye 5 OF JUNE 1631 &
IS HERE INTERRED LEAVING
HIS DEARE WIFE BRIDGET TO LAMENT HIS LOSSE &
HIS LARGE ALMES TO Ye POORE TO COMMEND HIS FAITH.
INCLOISTERED IN THESE PILES OF STONE
THE RELIQUES OF THE FRYER REST
WHOSE BETTER PART TO HEAVEN’S GONE,
THE POORE MAN’S BOWELS WERE HIS CHEST
AND ‘MONGST THESE THREE, GRAVE, HEAVEN, POORE
HE SHARED HIS CORPS, HIS SOUL, HIS STORE.

The anatomical and medical puns in this poem suggest that it was intended for use on Dr Thomas Fryer’s monument, and that Henry may well have been thinking about memorialising his father before his own unexpected death. The epitaph also of course puns on the name Fryer, and may contain covert references to the family’s Roman Catholicism — friars were invariably associated — for good or bad — with Roman Catholicism.

Henry Fryer’s Will makes it clear that his father was first interred in the Chancel, but was to be moved to a vault under the Manor pew, in which they were to be interred together. The top of what appears to be a seventeenth century tunnel vault is situated beneath the pews in the north aisle, which suggests that the Manor pew was there, and that this is the Fryer vault. The north door gives convenient access to the Manor.

Cole’s drawing and comments show that the monument was formerly enclosed by railings, and had a frame which enabled a curtain to be drawn in front of it (such curtains, either real or represented in stone, were common in monuments of this date). It is not known when the curtain rail went: the railings are shown on an early photograph, and were probably destroyed — in an act of deplorable vandalism — during the Second World War.