The church nestling among the farms

Harlton is a small village situated on the spring-line at the base of the low range of hills which form the southern section of the parish (the spring-line itself is indicated by the old village pumps, one of which may be seen near the church gates, and another in Eversden Road).

The availability of water and building materials, in the form of clunch* (a number of houses are built of this material — notably Clunch House, again in Eversden Road) means that it has attracted settlement from an early period.

There are Roman remains in the northern angle of the fields between Eversden Road and the A603 (the Roman road from Ermine Street to Cambridge) and an interesting burial of a woman in a Roman tumulus was excavated at the beginning of the twentieth century on the parish boundary with Barton, near Lord’s Bridge.

The prehistoric Mare Way runs along the ridge to the south of the village and forms the boundary with the parishes of Orwell and Barrington. Much of it still exists as a footpath which may be reached from the southern side of the road through the village, and from which Ely Cathedral is visible.

A traditional verse about Cambridgeshire villages refers to ‘Harlton catchhares’. Although the tag is derogatory, implying that the villagers chase fruitlessly after impossible objectives, the hills to the south have always been rich in hares. An eighteenth-century picture shows Lady Harley hunting the hare on Orwell hill, with Harlton in the background, and hares are still to be seen in the hill-side fields. 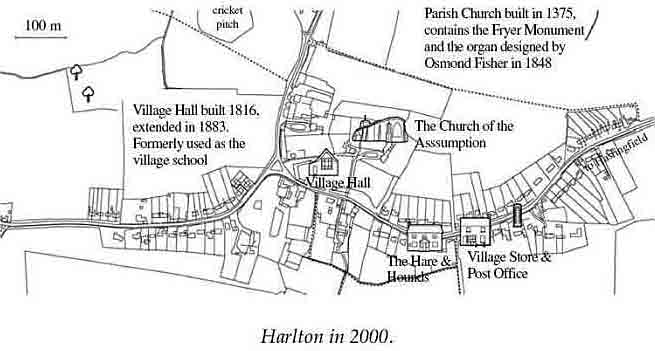 The village has never been large, and until comparatively recently most of the land was owned by absentee landlords and farmed by tenants. It features (as ‘Herletune’ — the farm of Herula) in Domesday Book, when there were 20 inhabitants. In 1664 32 households were recorded in the survey for hearth tax, of which two (Jonathan Allen the rector and Giles Robson — the only gentleman) had five hearths each, six houses had three hearths, and fourteen had only one (as a comparison, Sir Thomas Wendy in neighbouring Haslingfield had 22 hearths in his great house, Haslingfield Hall). On the other hand, only one householder was too poor to be rated, although in his will, dated May 27, 1631, Henry Fryer, then owner of the Manor, desires his executors to ‘remember Harlton Parish amply … because the parishoners be most or all of them of meane condicion, & not able to relieve them as their wants require.’ Harlton’s largest recorded population to date was in 1871, when 335 people lived here. Besides farming, the principal source of income was quarrying — stone for Cambridge Castle was quarried here in 1295, from a quarry that was still in use (ultimately as a source of marl) at the beginning of the twentieth century, and records show that there were clay and gravel pits in use for at least three centuries. The quarry may be reached by the footpath to the eastern end of the village. The village also had many orchards, particularly producing greengages, which may till be found growing wild in local hedgerows.

Although something of a backwater the village has not been entirely immune from the upheavals of history. The houses and buildings of William Bateman were ransacked and burnt during the Peasants’ Revolt of 1381, and the present state of the church makes it clear that it suffered some iconoclasm during the Reformation (although the arch-iconoclast of the Civil War period, William Dowsing, seems not to have visited the parish: there was wet weather when Dowsing was in the area and it is possible that the Bourn Brook flooded, rendering the parish inaccessible).

Harlton’s boom period came in the later nineteenth century when, along with many other villages in the area, it was a source of coprolites. Coprolites, which are phosphatic nodules occuring in the subsoil, were so named because they were believed to be fossilised faeces — either of dinosaurs or early mammals — and were prized as a source of fertiliser. They were obtained by digging in deep opencast trenches, but the boom was a short one, and the industry was destroyed by the introduction of artificial fertilizers. The Wheatsheaf pub on the A603 was known for a number of years as The Coprolite Diggers before reverting to its original name in 1960. The church registers show that in the nineteenth century the railway, which passed through the parish on the line which is now part of the Mullard Observatory, was a major employer.

A local tradition claims that the comparative dearth of cottages in the village is due to an incident during the First World War, when sparks from a traction engine, which was running late on a recruiting drive through some South Cambridgeshire villages, and fired up as it went through the small (and therefore comparatively unproductive) Harlton, ignited the thatch on a cottage and caused a fire which destroyed many homes. Traction engines are still kept in the village, but are nowadays driven with greater care! Harlton was also the site of the last Maypole in Cambridgeshire, which was still in use in the late nineteenth century. Its site is commemorated in the name of Maypole farm, at the crest of the hill of the A603 to the south of the village.

In 1967 pulsars were discovered at the Mullard Radio Astronomy Laboratory Observatory which is situated in the northeast sector of the parish on land previously used as a munitions factory (a full history of the site, as both railway station and muntions factory may be found at the Mullard Laboratory). The discovery was made by Jocelyn Bell, but she did not share in the Nobel prize awarded for the discovery, which was given to two senior men, Martin Ryle and Anthony Hewish. This omission has given rise to the Bell No-Prize awards for women’s scientific achievements.

Like most rural areas the character of the village has greatly changed in the past half-century, and although farming is still important, there is a wide variety of professions among the inhabitants, many of whom are connected to Cambridge University. There is no longer any school, garage or shop and Harlton has, like many other small places, become mainly a dormitory for people whose economic activity takes place elsewhere. There is, however, a great deal of social activity, based on the church, the pub and the village hall, and a growing number of families among the population. Those who built the church might not recognise the village or its way of life, but it remains a strong community.

harltonadminThe Village and The Church05.26.2014