ast West Railway Company (EWR) has chosen Route E (see map below) as the preferred route to connect Bedford to Cambridge. This route could go through or very close to Harlton and many villagers have already been contacted by the company for survey work. The railway is to have a station at Cambourne, but no local stops. It is considered to be an ‘inter urban commuter railway’ not a ‘metro service for Cambridge’. It will not serve Harlton at all. It is very likely to cause a huge amount of disruption in the building of it and cause adverse damage to the environment, land and people living close to it.

The aims of the group are to consider the area of Option E between Toft and Great Shelford, where the line will connect to the West Anglia Main Line. It will give local residents/Parish Councils direct and strategic input into the alignment and to obtain greater bargaining power in dealing with EWR if parishes are approached individually. The EWRCAA group will only consider EWR’s Route Option E as it stands, even though it is recognised this may change.

In the setting up of EWRCAA (now known as Cambridge Approaches) it is hoped that people will come forward to volunteer their expertise in the following areas:

It is a matter of urgency that if any villagers feel strongly about this and feel they can help in some way that they get in touch with Harlton Parish Council (see below), or you may contact Cambridge Approaches Action Group directly: info@cambridgeapproaches.org

EWR is currently in Stage 2 of the project – developing route alignment options. By 2021/22 they will have chosen a preferred route alignment. Construction is planned to start in 2025. If we want to have any say in this we need to act now.

Summary of the Environmental Impact of EWR Current Proposals

If you have any questions regarding EWR or wish to find out more about Harlton’s involvement with Cambridge Approaches, please get in touch with Isabel Robinson, Harlton Parish Council (isabel.robinsonm@gmail.com, 01223 262564).

Cambridge Approaches endorsed CamBhttp://www.cambedrailroad.org/edRailRoad’s petition can be found here:
This is call for a fair assessment of all EWR routes into Cambridge. Please sign it to demonstrate our support for a railway that serves the growing population areas (Cambourne and Northstowe) of Cambridgeshire.

EWR has published their consultation report – it makes grim reading.

Everyone is strongly encouraged to express their views.

Please take a look at the proposed route/s. The consultation report is 144 pages, however Section E: Harlton to Hauxton (pp. 244-249) is the most important part for our village. It looks as if the proposed line will cross Washpit Lane and the road between Harlton and Haslingfield. There is no indication whether there will be any crossing points and so could cut us off from Haslingfield and leave us with only one route in and out of the village. It also looks as if the proposed route is going to come exceptionally close to the Haslingfield end of the village and properties may need to be demolished. This is the most important time to make sure all of our voices are heard. Please express your concerns/views to EWR and Anthony Browne. Make sure they are fully aware that we exist as a village. It is a very worrying time. 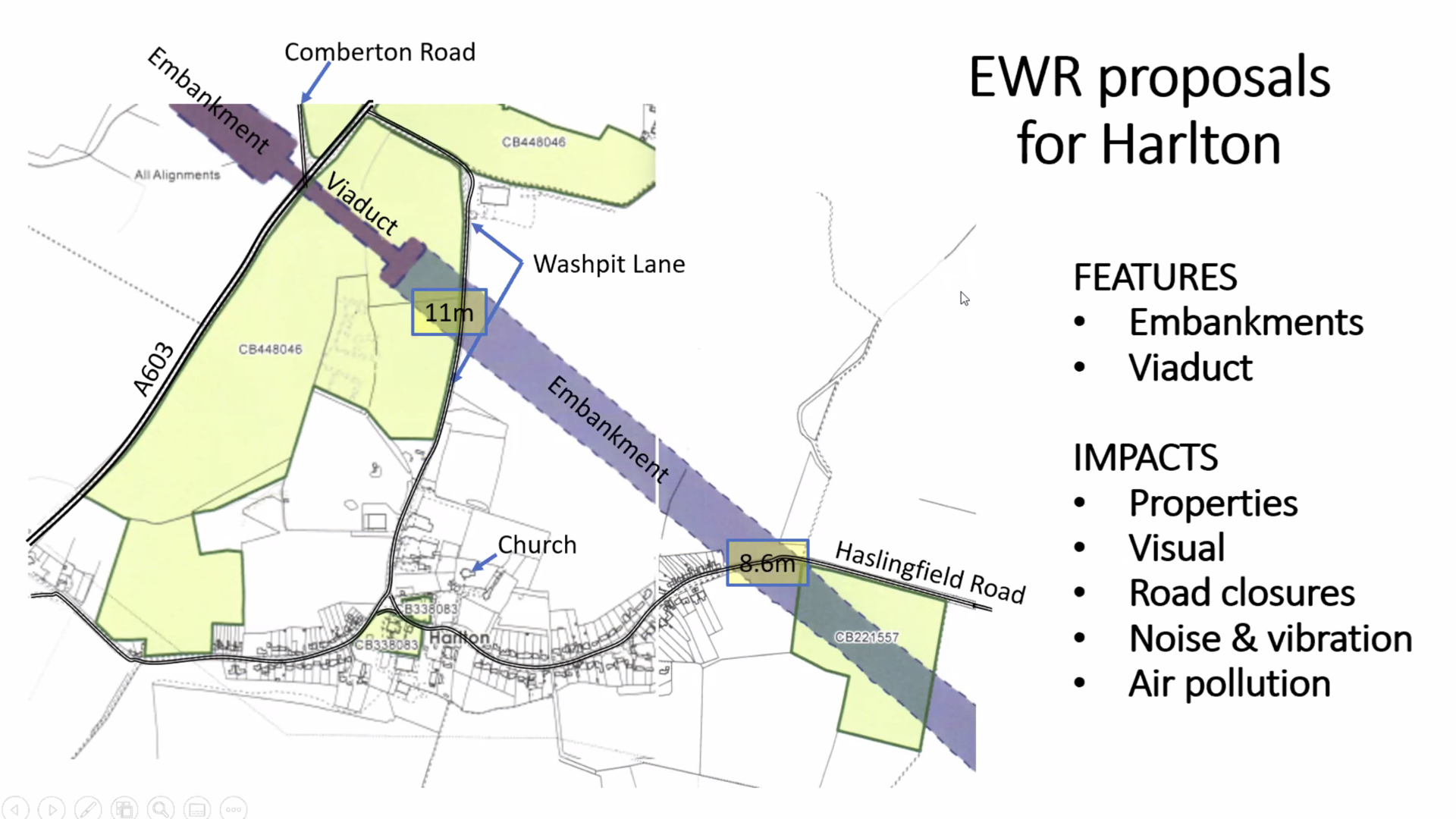 The Parish Council will be responding to this consultation on behalf of the village and will press Anthony Browne for support. We still favour the northern approach into Cambridge and a fair review of this as championed by Cambridge Approaches.

We will host a Public Meeting ( Harlton Village) – to discuss the East West Rail Proposals on Tuesday 20 April, starting at 7.30 PM

Welcome from the Chair of the Parish Council

What the Parish Council intend to do going forward

What can the Village do to help?

Harlton Working Group has been formed by a small group of villagers concerned by the threat of East West Rail’s proposed railway line that will run through Harlton to Cambridge South station.  The group has the following objectives:

Harlton Working Group is sending out weekly emails with suggested actions through the village email group, through WhatsApp and Facebook.

To join Eversden Working Group weekly Zoom on Thursdays at 8pm – open to all residents where people can get involved and stay up to date:

Harlton Working Group has been looking at targeting specific Councillors, MPs and organisations with questions we feel are not being answered properly. We are trying to encourage as many villagers as possible to bombard them with emails or letters in order to create lots of noise and to start questioning the decisions of EWR.

Why isn’t Northstowe, the largest new town to be built since Milton Keynes, with an estimated 10,000 houses going to have a railway station connecting it between Oxford and Cambridge? EWR’s mantra is ‘creating new connections between local communities’, so why are they ignoring the northern approach into Cambridge and the thousands of people who could benefit from this railway?

How can the government claim it is leading the way tackling climate change, when it is going to use 1960s technology on a next-generation railway?

Keir Starmer – Leader of the Labour Party – keir.starmer.mp@parliament.uk or leader@labour.org.uk

This week we are focusing on the newly elected Labour Mayor of Cambridgeshire and Peterborough Combined Authority – Nik Johnson.

During the pre-election call that Eversden Working Group organised for the 3 Mayoral candidates, Nik Johnson supported a northern approach into Cambridge and a fair consultation for both the northern and southern routes. His office can be reached via the Cambridgeshire and Peterborough

Please make sure you select ‘Mayor’s Office’ in the ‘What are you getting in touch about’ section.

1. Will you fulfil your promise to voters in South Cambs in supporting a northern approach and a fair/equal consultation process?

2. What is the justification for a new railway line that divides small villages to the south and west of Cambridge and fails to connect the areas with significant population growth – ie. Northstowe and Waterbeach?

3. Why is EWR proposing to use diesel trains when the government is committing to net zero carbon?

Please do not stop with any other letter writing or emailing that you are doing. If anyone has replies from any of the letters or emails, please could you share them? Send replies to me: isabel.robinsonm@gmail.com

This week, following Anthony Browne’s questioning of Boris Johnson, we are focusing on the Treasury and the business case of EWR.

Lord Agnew, Minister of State (Minister for Efficiency and Transformation) (one of his responsibilities includes public value and planning and performance) contactholmember@parliament.uk and address Lord Agnew in subject heading

2. With a 40% decrease in commuter traffic from pre-pandemic levels, does the business case for EWR offer value for money for tax payers?

3. Boris Johnson stated this week in PMQs that the ‘commuter bustle will come back’. The northern approach into Cambridge would benefit 50,000 people in Northstowe and Waterbeach New Towns. However, the current proposals (with no proposed stops south of Cambourne) only obliterate landscape and sever villages in a low population area. Surely a comparable business case of the northern and southern approach into Cambridge needs to be reassessed?

As usual, feel free to embellish, or just cut and paste.

Please do not stop with any other letter writing or emailing that you are doing. This is just a way to create lots of noise and hopefully to get people questioning the decisions of EWR.

Also, share with friends in neighbouring villages. Many people in Cambridge and surrounding villages are unaware of the proposals.

If anyone has replies from any of the letters or emails, please could you share them? Send replies to me:

Look out for another question next week!