The Memorial Wall is a community project started at the Millennium. The Wall is built along the western boundary of the church yard. Its purpose is to provide a memorial to villagers or those with close association with the village. Names can be carved into the stones which are set into the wall. 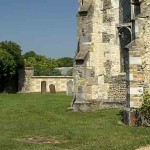 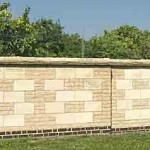 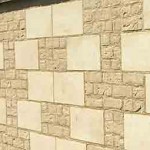 For centuries, Harlton church yard with its fine view across the Cambridgeshire countryside has been the final resting place of many villagers. However, there is now little space to place memorial stones of villagers. This situation would have caused sadness and we were in danger of losing the continuity of the church yard as a memorial to past inhabitants of the village.

Planning
In 1997, Harlton Parish Council set up a committee to organise village celebrations of the Millennium. A questionnaire listing a range of activities and projects was distributed and villagers were asked to indicate their preference. The most popular project was the building of a Memorial Wall.

It seemed most appropriate to build the Wall in the church yard. Permission was quickly given by the diocesan authorities, by English Heritage, eventually by South Cambridgeshire District Council and by SCDC Conservation Officers after several changes were made to the architect’s plans.

Finally, SCDC planning permission was given to the Parish Council in 2001 for 4 panels each of 4.05 metres to be built along the western boundary of the church yard. Each panel was to be built of Oakington Buff bricks and would contain 30 stone tablets of Stoke Top Bed for inscriptions.

Responsibility
In 2000, the Parish Council invited the Parochial Church Council to accept ownership of the Wall as it was to be built on church land.

The Parish Council and Parochial Church Council agreed that a joint church and village committee should be set up to administer the Wall whose members are John McNeil, Jennie Tombs (PCC), Alison Littlefair and Ben Banks (Village).

The Keeper of the Wall is John McNeill who keeps an up to date plan of the Wall, oversees the choice of stones and maintains a record of fees paid. The church wardens and vicar have overall authority.

How to reserve a stone
Applications to purchase stones (full stone £400; half stone £200) are submitted to this committee through the secretary Alison Littlefair (262801). The cost of carving is the responsibility of the purchaser. Click for form.

Stones may be purchased for retrospective, present or future inscription of the names of Harlton residents or those who have or have had close connection with the village.

Phase 1 of the building
The first two panels were built by Hibbitts in 2003 at a cost of  over £9,000 including fees. Tom Banks generously dug the footings.

This phase was formally opened in May 2004.

Phase 2 of the building
It is now possible to plan the building of 2 further panels. Sufficient bricks have already been purchased on the advice of the architect who warned that they would become unobtainable.

Fund raising for Phase 2
Fund raising has begun – both the PCC and the Village Hall Management Committee have donated £500 each from their share of the proceeds of the Fete, the Parish Council has donated over £500 and we also have money from the sale of stones. We have applied for several grants and are holding fund raising events.

Our picture shows the first two sections of the wall. Planning permission has been granted for two further sections, and fundraising is under way to enable them to be built. The first fund raising event was a tea party in the Rectory garden that raised £255.